Members of the ContraPianoDuet are: Bassoonist and Contrabassoonist – Dr. Dariusz Bator (Soloist of the Wroclaw Opera Orchestra, Poland) and Pianist – Dr. Gracjan Szymczak. Both artists are Lecturers at the Karol Lipinski Academy of Music in Wroclaw. The ensemble was formed in 2020 by Dr. Dariusz Bator, and its inspiration was promotion
of chamber music, with particular emphasis on those performed on a rare instrument
in a solo role – Contrabassoon. Apart from contemporary music, the ContraPianoDuet repertoire includes various eras pieces. 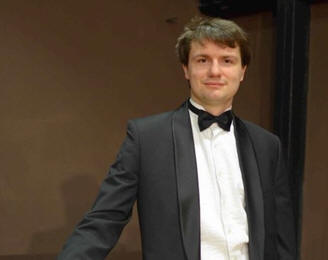 He was born in 1986 in Wroclaw (Poland). He graduated from the Karol Lipinski Academy of Music in Wroclaw in the following classes: Professor Grzegorz Kurzynski (Piano), Professor Lidia Grzanka-Urbaniak (Cello) and Professor Marek Pijarowski (Conducting) receiving a diploma with distinction in each specialty. In 2012, he obtained a Doctoral degree, and in 2019 a postdoctoral degree in musical arts.

He is also a laureate of several dozen national music festivals. He has received numerous scholarships from the Minister of Culture and National Heritage, the President of Wroclaw Scholarship and the Piotr Kler Foundation Scholarship. He recorded for Polish Radio and Television. He has six solo CDs in his artistic output. He conducts lively concert activities – he has performed in Poland, Austria, Czech Republic, France, Germany, Italy, Norway, Scotland, Sweden, Turkey, China and Australia.

In 2012, he started working at Wroclaw Academy of Music. As a teacher, he is often invited to conduct Piano courses, as well as to sit on the jury in Piano competitions.
In 2019, he was awarded the Bronze Cross of Merit. From 2020, he is the Deputy Dean
of the Instrumental Department at the Karol Lipinski Academy of Music in Wroclaw.